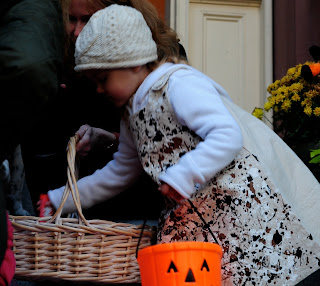 Happy Halloween from me and The Serious Girl.
Posted by CKHB at 10:41 PM 5 comments:

Email ThisBlogThis!Share to TwitterShare to FacebookShare to Pinterest
Labels: My photos

It's the most wonderful time of the year...

That's right. I'm talking about National Novel Writing Month. A month of collective insanity and literary exuberance during which time we try to remember:
You can find my NaNoWriMo profile here, if you're playing too, and want to be my "writing buddy." You can find my NaNo posts from last year by searching for the NaNoWriMo tag... and here are some of the more substantive ones that I plan to retweet over the course of the next month even if I get no other blogging done:
I'll be writing at the coffee shop across the street from Serious Girl's preschool every weekday morning next month. My record in one month is 30K words... let's see if I can top it. Let's see if YOU can top it.

Email ThisBlogThis!Share to TwitterShare to FacebookShare to Pinterest
Labels: NaNoWriMo 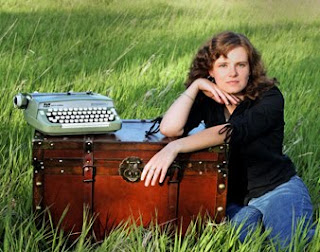 Today's guest blog is written by K.M. Weiland! She writes historical and speculative fiction from her home in the sandhills of western Nebraska. She enjoys mentoring other authors through her writing tips, editing services, workshops, and her recently released instructional CD, Conquering Writer’s Block and Summoning Inspiration.

I first "met" K.M. online through her blog Wordplay -- her videos in particular give solid advice, and I highly recommend that everyone drop by and check it out!

How to Train Your Muse (The Demerit System)
We’re accustomed to think of our muse as a whimsical and erratic fairy-like creature, or perhaps a wise old prophet forever stroking his beard and poking his spectacles up higher on the bridge of his nose. Either way, the muse often seems untouchable. Fairies and prophets aren’t likely to listen to the entreaties of mere mortals like ourselves, so all we can do is wait around until they start thinking kind thoughts about us. Right?

Actually, I tend to think of the muse more along the lines of a child prodigy: brilliant, but still in need of a firm guiding hand. Just as it’s our responsibility as parents to train our children to develop good habits, it’s also within our capabilities as writers to train up our muses in the way they should go. And, as I discuss in my recently released CD 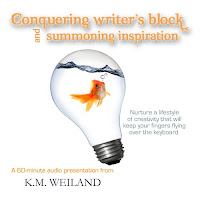 Conquering Writer’s Block and Summoning Inspiration, they should also go toward making our jobs as writers that much easier.

Just as with bringing up children, the best way to train our muse is to map out a course of punishments and rewards—a demerit system of sorts, if you will. Actually, this isn’t so much about training our muses as it is training ourselves to have to good habits. It’s a proven fact that humans are motivated exclusively by two factors: pain and pleasure. So let’s put that knowledge to good use, shall we?

The first step is put some goals in place. Figure out what it is you and your muse need to achieve. Finish that novel? Write on a more consistent schedule? Come up with a new story idea? Submit your finished manuscript to twenty new agents? Whatever the goal, you can then break it down into bite-size pieces, perhaps adding deadlines where appropriate. For example, if your goal is to finish your novel, and if word count goals work for you, you might assign yourself a certain word count every day.

Now that you’ve sat your muse down, given it a talking to, and explained what you expect of it, it’s time to start putting that reward/punishment system to work. What’s going to happen if you fail? Perhaps failure means no more television for a week (now it really sounds like we’re talking about kids, doesn’t it?). Maybe it’s something as radical as the word-erasure punishments on Dr. Wicked’s ridiculously effective Write or Die interface. Whatever the punishment you decide on, make sure it’s something you’re going to regret going without.

But don’t forget the fun part of this exercise. The rewards! If you knock down those word count goals like so many bowling pins in a strike, you deserve something splendiferous at the end of the game. Chocolate and ice cream are always good motivators. But maybe you’ll want to reward your muse with something extra special: that hardbound book you’ve been craving, a vacation, a new laptop? If the punishment should fit the crime, then the reward should fit the triumph.

The whole point of pushing and pulling your muse via the punishment/reward system is to convince it to develop good writing habits. Once the habits are in place, they’ll be hard to break. Not that you still can’t reward yourself with ice cream after every good writing day!
Posted by CKHB at 12:01 AM 8 comments:

But I still reserve the right to correct bad grammar I find in graffiti. 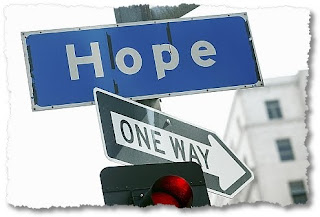 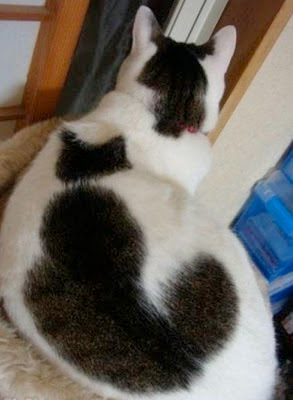 There Are No Words. 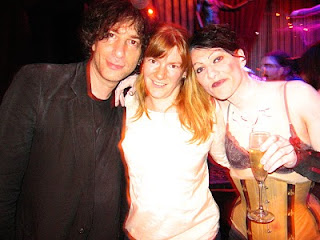 Neil Gaiman. Me. Amanda Palmer.
In that order.
It was probably a few weeks ago that tickets for ART's production of Cabaret starring Amanda Palmer went on sale. Shortly after that, I saw Neil Gaiman tweet that he'd gotten a couple VIP tickets for himself. And I may have tweeted this, and may have just thought it... "I'd spring for a VIP ticket if it meant I got to see Neil Gaiman on top of getting to see the show. Anyone know which night(s) he's going?"
And then the thought went out of my head. I tried to schedule a night to buy a regular ticket, but Husband has been doing lots of traveling for work, and Serious Girl has not been amused by my attempts to find babysitters other than her beloved nanny (who now has another family as her priority), and it just never came together. The show sold out, and I was S.O.L.
Naturally, I was disappointed, because Cabaret is one of my favorite musicals. First of all, I am a fool for the really dark and disturbed musicals (see also Sweeney Todd). But I also took "Broadway Dance" classes at Crunch Gym in NYC during my first year as a practicing attorney; in these classes, the gym hired Broadway dancers to teach the stage choreography for the shows they were currently in. As a result, I actually learned the Broadway routines for "Don't Tell Mama" and "Mein Herr." So, I love this show because part of my brain insists that I've actually performed this number, yes, I am one of you, cabaret dancers, and life is beautiful.
Ahem.
Then, on Monday, Neil tweeted that he had two VIP tickets for sale for Wednesday night, first come, first serve. After some frantic texting and emailing, it turned out that our nanny COULD babysit that night, and wait, even better, Husband's overnight trip was postponed and so he could just stay home with Serious Girl if I wanted to go out that night, and HOLY CRAP the ticket is still available, YES, I will buy it, MINE, The Precious... ssss... ssssssss...
Ahem.
So I got to go to the show. And I got to say hi and thanks-for-the-ticket to Neil during intermission. (Turns out his daughter and his assistant both bought tickets for the same show, and obviously he was going to sit with his daughter, so the tickets his assistant bought are the ones that became available at the last minute.) And because it was a VIP ticket, I got a free drink and an awesome little swag bag. And then I got to hang out and chat with Amanda and the other 3 VIP ticket-holders after the show. During which time Neil got me another drink. And then I got to meet the two women who were going to GET MARRIED ONSTAGE during the late-night cabaret after-show. Here, I took photos: 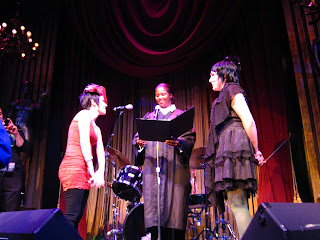 Rosalie is in red, Sarah is in black. 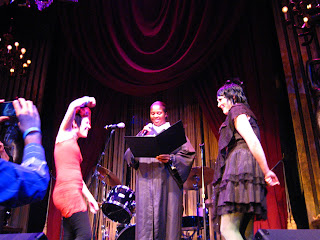 Punk cabaret lesbian wedding, can I get a HELL YEAH? 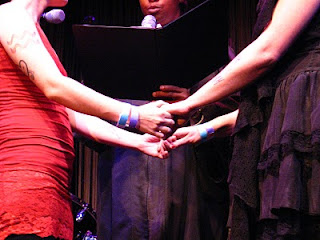 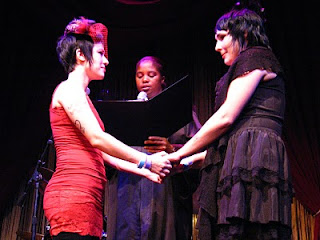 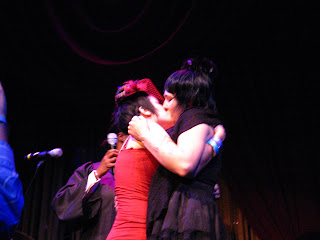 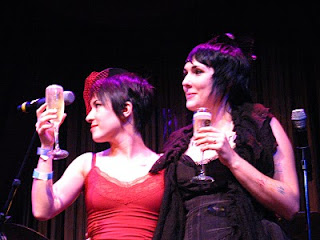 Congratulations, ladies!
It was amazing.
And after all that, I was finally able to grab both Neil and Amanda at the same time for a photo in a manner that I hope did not disrupt their night (because, dude, she was running a show, and he was with his daughter, I was SO OBVIOUSLY not their priority) and Neil's daughter Holly took the picture, and it came out great even though she had to use the flash... and then, even though it meant I had to miss the second half of the late-night cabaret, I ran home before I could turn into a pumpkin.
And that, honey, is why I didn't make it home until after midnight. And why I was barefoot with my shoes in a pink swag bag. Thank you for understanding how awesome this was for me.
And of course Amanda's performance as the Emcee was spectacular -- although I have to say I think the actor who played Fraulein Schneider was the best of the evening. He was heart-breaking and mind-blowing and there are no words.
Okay, apparently I lied. That was a LOT of words. But I still fall short of describing it all.
Posted by CKHB at 8:55 AM 16 comments: