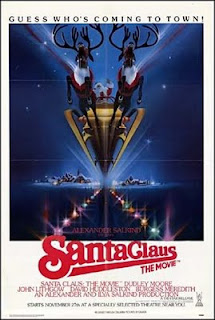 I was in Santa Claus: The Movie with John Lithgow,
John Lithgow was in Footloose with Kevin Bacon.
'Tis the season! Santa Claus: The Movie will be on AMC this year: tonight at 10pm, Monday Dec. 14 at 10:15pm, and Tuesday Dec. 15 at 2:45am. What can I say, it's no A Christmas Story, so it's not gonna get the best time slots. I'm just glad that it's showing in December; I hate it when it gets aired during the brief window between Thanksgiving and Xmas. I mean really, who thinks about Christmas movies in November?
So, what can I tell you about my former acting career that you can't find for yourself by looking me up on IMDB or by reading that interview I did with KringleQuest?
Santa Claus: The Movie (1985)
My favorite scene from this movie was cut. (I got to see some early footage before the final cut was complete.) In this scene, the first time you see Santa flying the sleigh, there are these huge painted stars behind him, and you do this double-take, and think, wait, THESE are the special effects, are you kidding? And then the camera pulls back, and you see that Santa is sitting in a training sled attached to rocking horses, and the elves are blowing a wind machine and fake snow on him with a starry night backdrop behind him, teaching him how to fly the sleigh. It was SO sweet and wonderful. I think a lot of sweet and wonderful stuff got left out of this movie in order to keep the special effects, yet stay under a 90-minute run time. I would love to see a Director's Cut of this movie.
I still miss the scones I ate for breakfast every day during my four months filming in London/Pinewood Studios.
Parent Trap II (1986)
Hayley Mills is the nicest person on the planet. Period. And the writer, Stu Krieger, was a Hayley fan growing up, so the script is just littered with inside references to her other movies. My character was named Nikki Ferris, which was the name of Hayley's character in a movie called The Moon-Spinners. My character's best friend was originally named Mary Grant after the role Hayley played in a movie called In Search of the Castaways (this was eventually changed for legal reasons to Mary Grand). I forget the rest, but there were dozens.
Pippi Longstocking (1985)

No, I wasn't in the movie, I was in the two-part ABC Saturday morning special that aired after the cartoons. Who remembers Captain O.G. Readmore? Holla!
My mom and I were pretty insistent that, as a not-yet-12-year-old, I should not have my hair permanently dyed for the role of Pippi. Still, my natural strawberry-blond hue was not dramatic enough, so the powers-that-be agreed to do a temporary dye, recoloring my hair pretty much daily. However, someone, somewhere along the way, LIED. The color was in fact permanent, and ABC ended up paying for me to go to the premiere hair colorist in Manhattan for nine months after filming for hot oil treatments to gently strip the color out of my hair. This is why, a year or so later, when a hairdresser for another film approached me with scissors, thinking she'd just do a quick trim to make sure my hair was the right length for continuity with scenes filmed a few months earlier, I reacted by screaming my head off.
Saturday Night Live, Season 7, Episode 16 (1982)
This was the Larry the Lobster episode. Possibly the first show ever to have the audience call in and vote for a televised result. In the rehearsal, the cast and crew pretended that the audience voted to boil Larry, and ate the rehearsal lobster. During the live show, the audience voted to save Larry... and the second the cameras stopped rolling, they boiled and ate Larry. There. Now the ugly truth has been told.
I was in the Reaganomics sketch, which included the line, "Thanks to Reaganomics, two of our kids are dead. And we sold the other one." Backstage, there were three kids arguing over which one of us has been sold. The other two actors were boys: one was C.B. Barnes, and my mom claims the other one was Seth Green, and I would kill to confirm this, but the kids' roles were totally uncredited and I have no idea how to find out if it's true or not.
The episode took place on a particularly cold and snowy Easter eve, and one of the news jokes was that the Easter bunny had frozen to death, but had left a will donating his ears and tail to Hugh Hefner. My mom had to explain the joke to me. I was nine.
John Cougar (not yet John Mellencamp) was the musical guest. We kids hung out with his band all night. They were so awesome... I remember John Cougar as being mostly bare-chested, wearing some kind of leopard-print full-length coat and sunglasses, and surrounded by scantily-clad women, but the band hung out in a separate room in jeans and t-shirts drinking seltzer, and they seemed to genuinely like kids. My mom, for obvious reasons, also thought they were awesome.
I remember seeing Eddie Murphy in a pink tutu and thinking he was kind of scary. I therefore refused to get his autograph, despite my mom saying she was pretty sure I'd want it later.
That's it! Okay, that was kind of fun. Go ahead and ask more questions in the comments, I'll do an acting Q&A post at the end of next week. Oh, and if you tune in to AMC just to see me in the movie, wait until you're at least 45 minutes in, because my character doesn't show up for a while.
Posted by CKHB at 8:23 AM