The Art of Anticipation 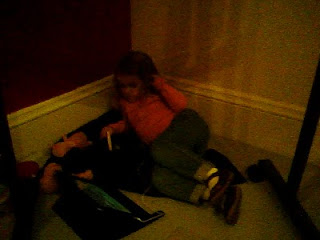 Before I say anything substantive about last night's Grub Street class, I would like to thank our instructor, Hallie Ephron, and my classmates for being so patient and kind with me... and with Serious Girl. I actually brought Serious Girl to class with me last night, because Husband was in South Dakota overnight, and I was unable to line up any of the babysitters SG trusts (it's not a long list).

So, from 7-9:30pm, SG sat on my coat in the corner of the classroom, eating dinner and watching The Backyardigans on the iPad. In this (intentionally) dark and low-res photo, you can see her holding one headphone to her ear, while holding her spoon with the other. There are two stuffed Backyardigans along the wall, and she's actually under a large easel. Class went until 10pm, but I decided not to push my luck or SG's bedtime any further and left at 9:30, taking the last writing assignment home with me.

Serious Girl, you were a nearly silent all evening, and you were a ROCK STAR. Hallie and my fellow students, thank you so much for giving us a chance and I hope we never disturbed your class experience.

So! Last night's class was called Writing Suspense. I am simply going to share some of Hallie's insights in bullet-point form:

Suspense and tension can be built through slowing the pace, creating a vivid sensory setting, putting the reader side-by-side with the character in peril (the "closeup" camera angle), juxtaposing the innocent with the unnerving, having the critical elements already established, and raising the stakes.

Suspense and tension can be eased by action, the anticipated bad thing actually happening (the payoff), something unexpected but harmless happening (the false payoff), humor, distancing the reader from the story (the "long shot" camera angle), summarizing or cutting away from the scene, or providing back story in the scene.

This class was a delight, and I'm picking up a copy of Hallie Ephron's Never Tell A Lie today. Hallie also authored Writing and Selling Your Mystery Novel, which a mystery-writing crit partner of mine recommends most highly.

Email ThisBlogThis!Share to TwitterShare to FacebookShare to Pinterest
Labels: Grub Street, My photos